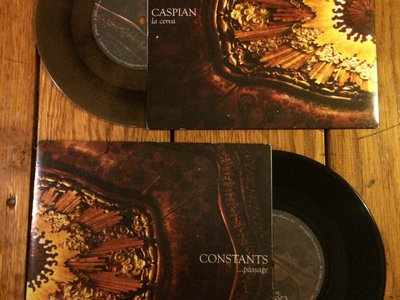 Just found a couple boxes of these!

The banger split 7" lovingly dubbed as the Conspian 7", originally released back in 2008 by Radar Recordings as the bands toured down to SXSW together to perform at various showcases. The tracks were later rerecorded and released by the Sheath on each of the bands respective following full lengths in 2009. But these are the original and exclusive recordings to this release and mark an exciting time in the scene was beginning to take shape and evolve at the time. Essential to own, and nearly out of print.

Currently available in EITHER Gold Haze OR Black vinyl. Please let us know which you prefer, first come first served.

ships out within 3 days